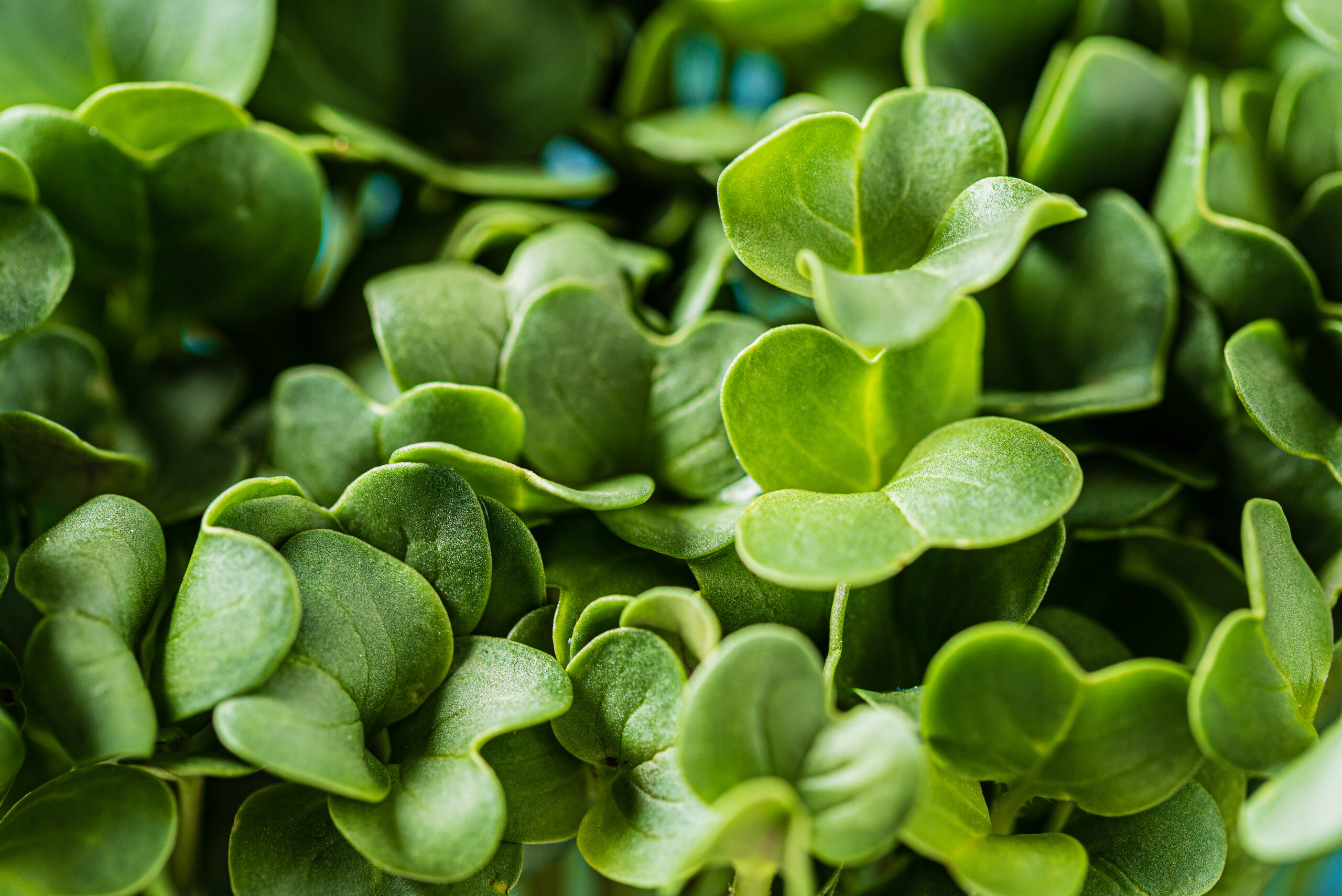 A key challenge for growers in controlled environment agriculture (CEA) systems is to grow crops that achieve a balance between the cost of energy required to raise a crop, and the amount of value that the resultant crop can realise. Whilst it is entirely possible to cultivate any type of plant in a controlled environment, some crops are currently considered unsuitable due to the amount of time required between germination and harvesting, and the amount of energy that will therefore be utilised during development.

One cultivation strategy currently popular in CEA and vertical farming is to harvest certain food plants at an early stage, thus increasing the speed and frequency of harvest cycles. Crops grown in this manner are either harvested as sprouts, or as microgreens. Sprouts are defined as the stage of growth between seed germination and before true leaves develop, and microgreens are typically the juvenile stages of leafy greens, vegetables and herbs, which are harvested after the emergence of cotyledons (first embryonic leaves), or in some instances after the first pair of true leaves have developed. This usually consists of a 1 – 3 week production cycle depending on the plant species.

Each approach offers certain production advantages, but generally they work well in controlled environment systems as they are small in stature, offering the ability to grow vertically, with short cultivation cycles. The resultant produce is also highly nutritious and attracts a premium value from consumers.

As a food source, sprouts are intended to be consumed in their entirety, including the shoots, rootlets, and seed. The use of sprouts as an ingredient is not new, in fact it is a practice with a history spanning thousands of years. Beansprouts have reportedly been part of Asian cuisine for around five thousand years. Contrastingly, microgreens are a relatively recent and novel area of expansion in the food sector, with research into their benefits and optimal growth strategies seeing a significant increase from 2018 onwards. However, even in such a short space of time they have demonstrated a significant market value increase, which is set to grow rapidly in the future. Consumer demand for new and exotic food types can be challenging to determine. However, ‘Superfoods’ have become a popular item, with consumers now looking more and more favourably on foods for health benefits as well as just calories. As such, if marketed correctly sprouts and microgreens could be crops which benefit from this favourable perception, particularly where there is a verified nutritional and/or medical benefit.

Microgreens are widely regarded to be good sources of nutritional or bioactive compounds. Harvesting at this early stage in the life cycle of the plant has been shown to produce higher beneficial phytonutrients and minerals and lower nitrate levels compared to the mature plant of the same species. Sprouts have similarly been noted to have high mineral, vitamin and bioactive compound levels across multiple studies.

Bioactive compounds produced by certain microgreen species are a particular area of interest in terms of crop potential. When grown in controlled systems, altering the environmental parameters during a growth cycle can alter or enhance bioactive compound production. For instance, different levels, durations, types, and spectra of light have been shown to alter phytochemical profiles of these crops. The recipes for altered or enhanced growth are varied but as an example, blue light can increase chemicals associated with flavour, and red light can significantly increase Vitamin C content in some species and increase or reduce Vitamin E content in other species. Furthermore, growth media, growth strategies and environmental factors can all impact both yield and nutritional contents.

Sprouts are produced from seeds via washing and leaving in high moisture environments with low or no light and optimal temperatures. They can be grown at significantly high seed densities and harvested once they germinate. Due to the need for root development and early plant growth with microgreens, seed densities must be reduced slightly to facilitate this space to grow. Microgreens are largely grown in soil but other growth media such as coconut coir, vermiculite or perlite can be used. Unlike sprouts, microgreen will require light.

Microgreens are highly compatible with hydroponic systems and can even be incorporated into aquaponic systems, as they tend to have relatively low nutrient requirements. Microgreens are commonly grown in 10 inch by 20 inch trays, on a range of substrates including organic and inorganic materials, though where inorganic substrates are used the addition of nutrients will be required. Microgreens are often appealing  as a crop choice to new-entrant growers as they are extremely versatile and can be cultivated in basic and smaller-scale systems including windowsill boxes, small containers, and garden beds.

These foods, particularly microgreens and baby leaf salads, lend themselves particularly well to CEA systems. Controlled environment systems, particularly vertical farms, have been noted to work best with crops that have a quick growth/harvest cycle and high market value. Furthermore, as these crops are often high in water content and eaten fresh, they are unfortunately at higher risk for bacterial contamination than other processed crops. Thus, production in systems where environmental protection and control is not possible may limit their potential application, due to increased risk of damage and infection.

It remains fair to say that challenges with sprout and microgreen crops will still exist for controlled environment systems. Many microgreen species have relatively short shelf lives post-harvest such as 1 – 2 days at room temperature. Much research is ongoing into harvest and storage techniques to improve shelf life by reducing microbial population impacts, so this may well improve. These include using chemicals, natural compounds, different packaging materials and modified atmosphere packaging. Other options for processing these crops to reduce their perishability include: high hydrostatic pressure processing, the addition of edible coatings, irradiation and drying techniques such as freeze-drying or microwave drying. Each option moving forwards needs to balance energy considerations with nutrient retentions as some processes can reduce beneficial nutrient levels present. For microgreens, a novel strategy for shelf life involves distributing fresh products in their growing media to be directly harvested as required by the consumer.

Microgreens and sprouts each offer some interesting crop options for controlled environment growers. Microgreens and sprouts are much more suited for cultivation in systems with control of the growth environment than traditional agriculture, and as such are highly suited to controlled environment farming. Currently, knowledge with regards to microgreen growth is in its relative infancy, but strategies for augmented growth, to increase the quality of the crop or the presence of favourable compounds, is rapidly being developed. As knowledge grows for the different inputs required by the different species for optimal growth, then the potential of this crop type will also continue to grow.

Consequently, the potential of sprout and microgreens as commercial crops in controlled environments is only beginning to be realised. It seems quite likely that in the near future this crop choice will become much more common place as utilisation spreads. In fact, due to the high health and nutritional benefits alongside ease of growth in small spaces with minimal inputs, microgreens and sprouts have even been suggested as key crops for long-term space exploration, demonstrating their high level of innovative use.